The quality and quantity of social interactions are some of the best predictors for mental health and for longevity in humans. However, the biological mechanisms by which these interactions can have such profound effects on our brain and behavior remain largely a mystery. In our lab, we use animal models to investigate these mechanisms at the behavioral, electrophysiological and neurochemical levels.

One of the circuits we probe in this context is the oxytocinergic system in mice. We approach this from three different angles.

The first and arguably the most impactful social interaction experienced in life is the interaction with parents. In mammals, the quality of parental care is key to the survival of offsprings. But what is the neural substrate for good parental behavior?

We investigate neural substrates for some key maternal behaviors. In particular, we are interested in understanding how maternal mice recruit the help of other adult mice in order to provide optimal care for offsprings. In this context, we investigate sensory processing of pup-related cues, and how it might result in activating the oxytocinergic system. 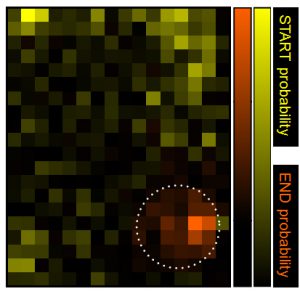 Certain social contexts, like the presence of familiar conspecifics, can alleviate the stress induced by dangerous environments, a phenomenon called social buffering. Other social situations can have the opposite effect, aggravating the stress response. For example, one can respond to a scream either by running away (fight-or-flight) or by offering comfort (tend-and-befriend), depending on social, circumstances.

Our research will investigate the neural circuits by which social contexts modulate auditory processing and behavior. We will use electrophysiological, functional imaging, optogenetic and pharmacogenetic techniques in mice to study the role of cortical and subcortical circuits in social modulation of auditory representations.

Animals can capitalizes on the presence and experience of another to change their own behavior. This form of learning is an efficient strategy for adapting to changes in environmental conditions, but little is known about the underlying neural mechanisms. A good candidate is the oxytocinergic neuromodulatory system, which has been previously implicated in social learning. 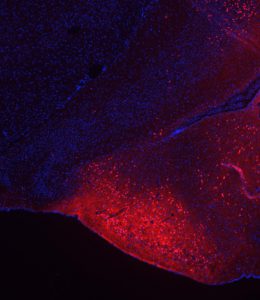 Oxytocin receptor (red) expression in the amygdala, a structure implicated in learning

Laboratory for social behavior and neuromodulation